Aquicore, an information tech startup offering cloud-based software for asset operations, today secured $14 million in financing. The company says it’ll use the funding to advance its platform and expand into European markets.

The buildings sector accounts for about 76% of electricity use and 40% of all U.S. primary energy usage and associated CO2 emissions, but the bulk of commercial real estate management teams monitor their energy and facilities with antiquated operations and maintenance routines, according to the U.S. Department of Energy. This makes it difficult to know how buildings are performing and where to invest resources, as well as how to coordinate project execution across portfolios.

Aquicore claims to solve this with a combination of AI, machine learning, and rules-based automation. Its diagnostics tool, which launched in July 2019, leverages algorithms trained on “decades” of crowdsourced knowledge to identify potential problems in building operations. The tool detects usage anomalies from a building’s energy curve and alerts the appropriate building staff in real time; for building engineers, it spots possible issues that could impact building operations, like late shutdowns and overnight equipment cycling. Once a problem is detected, the tool calculates the anticipated costs and sends a financial impact report to property managers and owners. 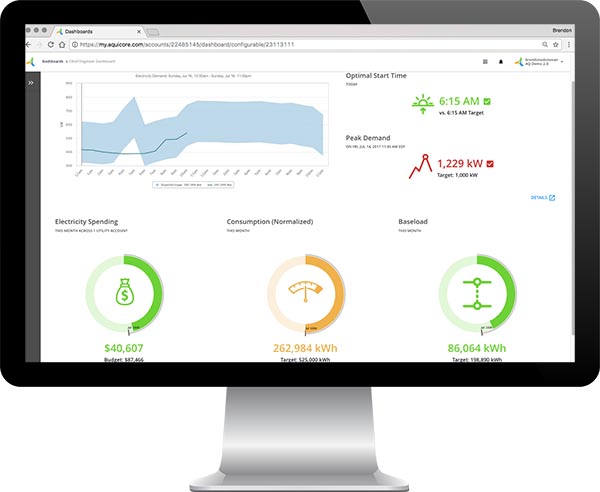 Beyond this, Aquicore’s platform enables employees to collaborate by recording notes and sharing building and equipment. It supports alerting and configurable performance targets as well as utility assessments informed by AI, and it boasts built-in budgeting tools that track real-time spending in a collated history. Aquicore manages utility spend against budgets over a period of weeks, months, or years, and thanks to predictive algorithms, the technology can anticipate the performance of buildings and compare actual performance with targets.

Aquicore automates things like meter readings and tariff calculations to minimize potential errors, employing historical data to check tenant invoices for anomalies. (Any bill that’s more than a standard deviation outside the norm is flagged for review.) The platform also provides a high-level view of portfolios’ devices, meters, and equipment, including live building data regardless of building type.

But according to Aquicore, its solution is already deployed with commercial real estate companies at over 1,000 buildings nationwide, optimizing more than 275 million square feet of real estate. At Globe Life Field in Arlington, Texas, it ostensibly helped to realize over $240,000 in overall energy savings. And at The Diplomat hotel near Miami, Aquicore says it identified $460,000 in savings after diagnosing and correcting building automation system issues.

Keyframe Capital led the investment in Aquicore with participation from A/O Proptech and Westly Group. It brings the Florida- and Washington D.C.-based company’s total raised to over $30 million following a $7.5 million round in May 2019.

Aquicore’s latest tranche follows its March 2019 acquisition of Entic, a startup developing a prescriptive analytics solution that generates targeted recommendations to drive better utilities and facilities performance for commercial assets. More recently, prior to the pandemic, Aquicore moved to a new headquarters in the heart of downtown Washington D.C., tripling its office space.