Amazon Web Services (AWS) today open-sourced a new simulator and machine learning toolkit for anticipating and mitigating the spread of COVID-19. AWS says that the suite, which comprises a disease progression simulator and models to test the impact of various intervention strategies, can help to accurately capture many of the complexities of the virus in the world.

While there have been a number of breakthroughs in understanding COVID-19, such as how soon an exposed person will develop symptoms, building an all-encompassing epidemiological model remains an uphill battle. Challenges in model building include identifying variables that influence disease spread across cities, countries, and populations. A performant model must also combine intervention strategies such as closures and stay-at-home orders and explore hypotheticals by incorporating trends from COVID-19-like diseases.

The machine learning models in AWS’ suite bootstrap by estimating disease progression and comparing the outcomes to historical data. Data scientists can run a simulator to play out what-if scenarios for different interventions and use templates for the state level in the U.S., India, and countries in Europe. In these templates, the toolkit draws on data sources that frequently publish the number of new COVID-19 cases worldwide. 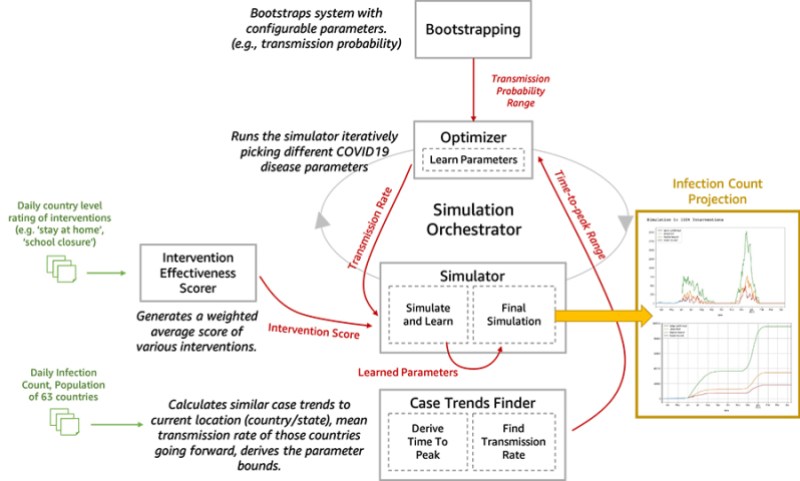 For the U.S., AWS’ suite uses the Delphi Epidata API from Carnegie Mellon University to access various datasets, including but not limited to the Johns Hopkins Center for Systems Science and Engineering, survey trends from Google search and Facebook, and historical data for H1N1 from 2009 to 2010. The toolset models the disease progression for each individual in a population and then reports the aggregate state of the population.

AWS’ simulator can assign a probability distribution to disease variables for each individual. For example, users can set parameters like whether individuals will develop symptoms within 2 to 5 days after exposure or 14 to 21 days after exposure. The simulator also captures population dynamics, such that the transition from one state to the next for an individual is influenced by the states of the others in the population. For example, a person transitions from a “susceptible” to “exposed” state in the model based on factors like whether the person is vulnerable due to preexisting conditions and interventions such as social distancing.

“Our open-source code simulates COVID-19 case projections at various regional granularity levels. The output is the projection of the total confirmed cases over a specific timeline for a target state or a country, for a given degree of intervention,” AWS explains in a blog post. “Our solution first tries to understand the approximate time to peak and expected case rates of the daily COVID-19 cases for the target entity (state/country) by analysis of the disease incidence patterns. Next, it selects the best (optimal) parameters using optimization techniques on a simulation model. Finally, it generates the projections of daily and cumulative confirmed cases, starting from the beginning of the outbreak [to] a specified length of time in the future.”