DoNotPay, a bot-based platform that helps consumers fight for their rights, is rolling out a new email service that automatically applies for refunds, cancels subscriptions, fights spam, and more by scanning messages in people’s inboxes.

The launch comes in a year in which the San Francisco-based company has seen a surge in demand due to the global pandemic, with consumers contending with canceled flights, closed gyms, and monthly memberships to reconsider due to reduced income. As the world transitions to the “new normal” post-lockdown, many consumers will still be feeling the pinch, putting DoNotPay in a strong position to apply its “robo lawyer” to more industries and use-cases. The company recently secured $12 million in funding to help it do just that, with backing from big-name investors including Coatue Management, Andreessen Horowitz, and Peter Thiel’s Founders Fund.

DoNotPay first came to prominence back in 2015 when British entrepreneur Josh Browder launched a website to help Londoners appeal parking fines. Using a rules-based algorithm, the service used historically successful appeals as a template to generate fresh appeals automatically, taking a great deal of manual labor out of fighting the system. In the intervening years, DoNotPay set up its headquarters in San Francisco and the business has gone from strength to strength across the U.S. and U.K., supporting consumers wanting to cancel memberships and subscriptions, sue robocallers, file for benefits, claim compensation, and more.

Browder told VentureBeat that DoNotPay now claims more than 75,000 subscribers, and he expects this figure to reach six figures by the end of the year based on its current trajectory.

“September was our best month on record,” he said. “We have now saved an estimated $40 million for our users.”

With DoNotPay Email, which is rolling out in the U.S. and U.K. now, consumers get a dedicated email address (e.g. billy@DoNotPay.com) that processes transactional emails from any company, such as food delivery platforms, video-streaming companies, or in-flight Wi-Fi providers. DoNotPay then suggests “actions,” which could be anything from cancel this subscription to apply for a refund. 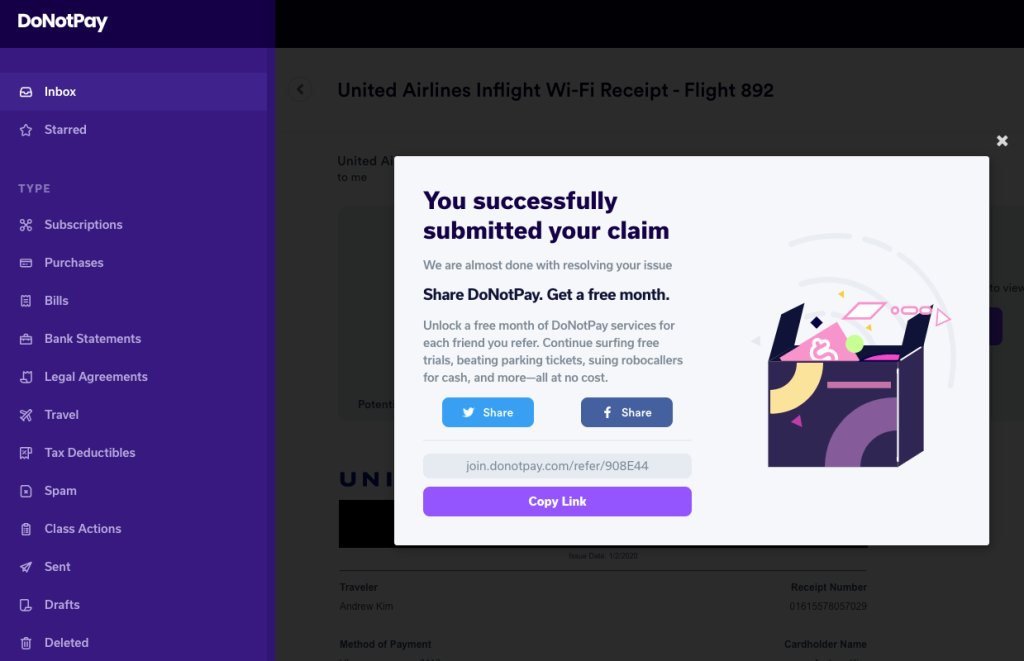 Above: DoNotPay: Claiming a refund for bad in-flight Wi-Fi

There are several ways people can get their emails into their DoNotPay inbox. Users can set their DoNotPay email address for specific sites that they think they may wish to apply for refunds from or otherwise do battle with, or they can set an auto-forward from their main email address (e.g., Gmail) so that everything that is sent to them also goes through DoNotPay’s filter.

But not everyone will want all their private emails to go to DoNotPay or switch their main contact email address to DoNotPay, meaning that for many people it will probably make more sense to just manually forward specific emails.

Automation for the people

While much of DoNotPay’s engine is rules-based, elements of the platform do use machine learning techniques such as natural language processing (NLP). For example, the company offers a Terms of Service (ToS) scanner that can spot undesirable clauses in small print — users upload a ToS document to DoNotPay, which then scans the text to highlight things such as forced arbitration clauses. Similarly, DoNotPay’s new email service also relies on ML to categorize emails by type.

“We have used our five years of data to build a machine learning model to automatically classify the emails,” Browder said. “It works with any type of email, and the software is automatically deciding how to save time or money with each email.”

Above: DoNotPay: Folders organized by “type”

DoNotPay Email packs a fairly extensive list of tools designed to help users save time and even earn money. By moving an email to the “spam” folder, for example, this automatically either unsubscribes the user or sends the perpetrator an email informing them that they must abide by CAN-SPAM laws if there is no obvious way of unsubscribing.

Moreover, the spam function also checks to see if there are any existing class-action lawsuits against the sender over other previous spamming chicanery, and the user is invited to join the suit and claim cash.

Other notable facets of DoNotPay Email include being able to identify any bills or bank fees that can be negotiated down, one-click refund requests for late package deliveries or defective merchandise, and automatically categorizing receipts for purchases that are eligible for tax deductions.

It’s not just about saving money and cutting through red tape, though — DoNotPay can also automatically check users into flights at a set time. This can be particularly useful for airlines that offer priority boarding to those who check in early for their flights, saving the customer from having to remember to do so manually.

DoNotPay Email is currently only available through the web, but it’s possible to set up an auto-forward from DoNotPay so that all messages are sent to the user’s main email account so they can easily access it from any client on any device. There are plans to add direct support for IMAP and POP3 by the end of October, so that users can sign into their DoNotPay email account through the usual email apps.

As with most good things in life, DoNotPay Email isn’t free — it comes as part of the company’s standard $3 monthly subscription. But that too is probably a good thing, as it suggests that the company is intent on making money from selling value to its customers, rather than gleaning data. As the old adage goes, “if you’re not paying for the product, YOU are the product.”

“Any free email service makes money by selling advertisements or user data,” Browder said. “We want to align our business model with our users’ needs.”