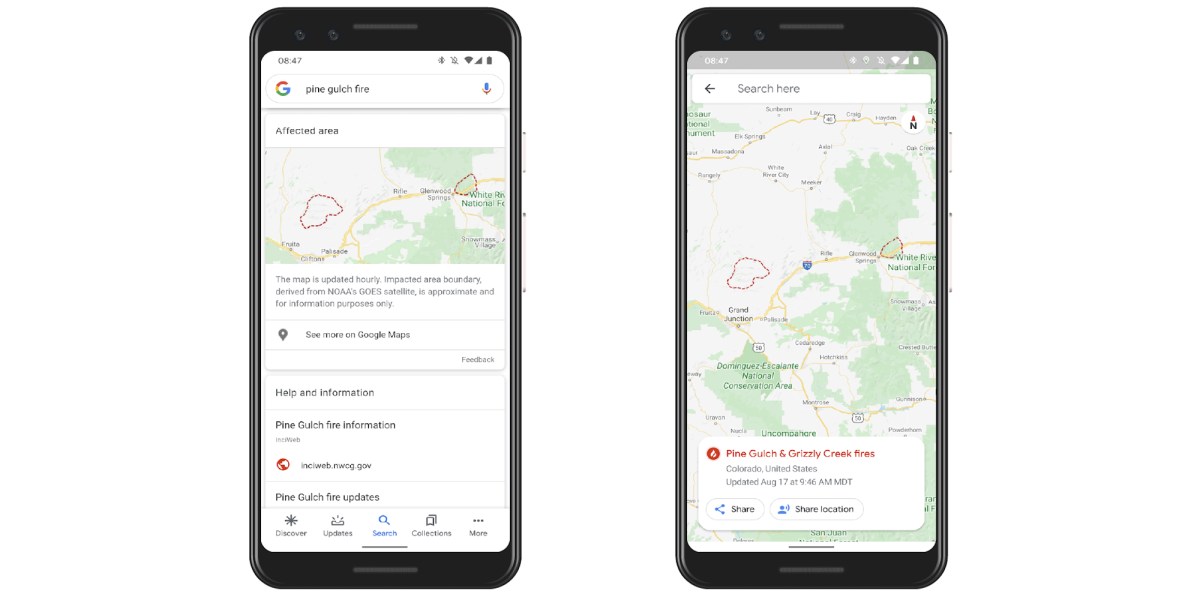 “You’ll have to forgive me if I appear or sound tired; as many of you know, we have quite a few fires burning in the state,” Abby Browning, a chief in the California Governor’s Office of Emergency Services (Cal OES), said during a Google product briefing with reporters. Forest fires are once again wreaking havoc in California and elsewhere. “[As of] about an hour ago, we are tracking about 360 fires. Twenty-six are large enough that the state is involved, and a fewer number of those have actual mandatory evacuations,” Browning added.

It’s timely, then, that Google has announced an update to Maps that shows how large a given wildfire is and where it’s headed.

“Wildfires are one of the most fast-moving disasters, depending on wind and fuel type,” Ryan Galleher, program manager at Google’s Crisis Response group, said in a briefing. “And so it’s extremely important for both people on the ground and their family and loved ones to sort of understand what’s happening.” Wildfires can take lives and cause billions in losses to homes and businesses, but their unpredictable nature makes it difficult to establish evacuation plans and allocate firefighting teams and other resources. And people trying to get to safety need to be able to see at a glance what they’re dealing with, what routes are unobstructed, and other general safety information.

Google relies on data from the National Oceanic and Atmospheric Administration’s (NOAA) GOES satellites, which use infrared (IR) and optical sensors to detect hotspots on the Earth’s surface that could be wildfires. The data is then analyzed by Google’s Earth Engine. The result is a red boundary in Maps that approximates the size of a given wildfire and its location. Google updates the Maps wildfire boundaries approximately every hour.

In addition to the wildfire boundaries, Maps users will see information on traffic and road closures, which is crucial for evacuating citizens and first responders.

Google said it has has been looking at ways to deliver crucial information to people through Search for a decade, when Googlers in Haifa, Israel watched the Carmel Mountain fire rage from their office window and realized they needed a way to at least find a hotline to call for information. In 2017, the company’s Crisis Response team rolled out SOS Alerts to Search and Maps, with the aim of adding important information, like local emergency numbers, key websites, and top news stories about a given crisis.

Updates to SOS Alerts in 2019 brought the ability to visualize hurricanes, among other things. Meanwhile, Google piloted a new feature — wildfire boundary maps, powered by satellite data — with the California Governor’s Office of Emergency Services and the Office of Emergency Management in Boulder, Colorado. The feature is now live across the U.S.

In Search, the SOS Alerts come in modules. The modules include top news stories, official updates (like from the National Weather Service), a map showing affected areas, safety tips from the American Red Cross, and help and information from trusted authoritative sources. It’s meant to be a significantly different experience from the typical Search, with less ad clutter and more relevant results.

Unfortunately, some of the people who need up-to-date information most may be in rural areas that lack internet access. They can download Maps when they are able to and use the feature offline, but without the hourly updates.

Search works the same across all platforms. Maps is supported by all modern browsers, but Google said some features will only work in the app.

Although the SOS Alerts and wildfire boundary maps are consumer tools, Google said it’s talking with state and local agencies about ways to work together more intentionally. The company also asserted that the 2019 pilot demonstrated how its crisis tools can help first responders and emergency management personnel.

The wildfire boundaries feature is available only in the U.S. for now, but Google hopes to take it global in the future.