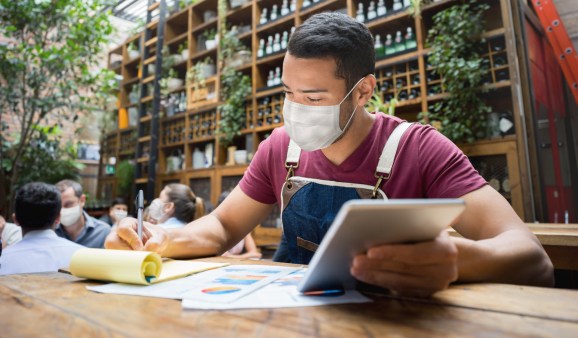 Using ML, Kabbage processed almost 300,000 PPP loans by the time the program ended, making it the second largest issuer of PPP loans in the country.

The smallest businesses have been among the hardest hit by the pandemic. Many relied on foot traffic which became non-existent as soon as stay-at-home directives took hold. And the median small business with more than $10,000 in monthly expenses had only about two weeks of cash on hand at the end of March.

The Paycheck Protection Program (PPP), a loan offered by the Small Business Administration (SBA) to provide a direct incentive for small businesses to keep their workers on the payroll, offered the possibility of relief. However, with phenomenal demand, there was a lot of confusion at the outset and small business owners were scrambling to qualify.

“When we discovered that the government was going to be providing billions of dollars in relief to small businesses, we thought it was important to help them get it,” says Kathryn Petralia, co-founder and president of fintech company Kabbage. “We knew we could serve smaller businesses well, and we started running in that direction as fast as we could.”

Over the course of the PPP sign-up period, Kabbage processed $7 billion in program loans. This meant providing support to nearly 300,000 small businesses and preserving an estimated 945,000 jobs at businesses from restaurants, gyms, and retail stores, to zoos, shrimp boats, and beekeepers.

It took only two weeks to build and implement this solution to benefit small businesses. The model training process began with humans reviewing documents to develop a training set that would help the model identify file types, the information needed for each identified file, and where to find it. When they first started processing the PPP applications, about 20% of their applications were fully automated, but by the time they started the second tranche, that number had grown to 80%.

Interestingly, even though 100% of Kabbage’s PPP customers had a bank account, they couldn’t get a PPP loan through their bank, Petralia says. Not because the banks aren’t sympathetic, but simply because they didn’t have the means to process the number of loan applications coming through, and tended to prioritize the larger loans from larger companies.

By August 8, which is when the extension of the program ended, Kabbage had processed nearly 300,000 approved loans with the help of ML, making Kabbage the second largest issuer of PPP loans in the country.

“AWS technology enabled us to serve more customers who are more vulnerable because they were smaller and didn’t have access,” she says. “For every 790 employees at these major banks, we have one — and we surpassed the biggest bank in the nation by application volume. That really demonstrates the power of the automation and the technology.”

Among the applicants was Kristy Kowal, a swimmer on the National Olympic Team for over 10 years. She holds eight American records, one World record, and won the silver medal in

the 2000 Olympic games for the 200-Meter Breaststroke. She’s now an educator and athlete-development specialist, and was hit hard when COVID-19 resulted in pools around the country closing down. After spending more than two months trying to get relief from the Pandemic Unemployment Assistance (PUA) in California and the Employment Development Department (EDD), encountering roadblock after roadblock, she was finally able to complete the PPP loan process quickly with Kabbage’s automated solution.

Going forward, Petralia plans to bring this ML solution to their cash flow management platform for small businesses, including the checking account product they recently launched.

“There’s a lot we can do there to help businesses spend less money in overdraft fees and get better access to services and get access to their deposited funds more rapidly,” she says. “We can use the AWS machine learning to build the models that help manage the risk for the smallest of small businesses.”

Join a round table with leaders from Kabbage and Novetta, as well as Michelle K. Lee, VP of the Amazon Machine Learning Solutions Lab, to learn more about the impact these machine learning solutions delivered and the lessons learned along the way.