Commercial building systems often require engineering teams with years of training. Even retrofitting old buildings with things like HVAC can be costly and time-consuming, not to mention error-prone. That’s why Troy Harvey and Jeremy Fillingim, entrepreneurs with backgrounds in hardware engineering, teamed up in 2016 to found PassiveLogic with the goal of bringing autonomous controls to the over $1 trillion building construction market.

PassiveLogic’s Autonomy Studio platform enables customers to develop systems for buildings and projects. It ostensibly streamlines automation by providing self-adjusting controls in buildings based on the laws of physics. (That’s as opposed to the set-points and controls manual building systems rely on.) PassiveLogic generates control sequences in real time based on changing building dynamics. The company’s decision engine analyzes the implications of control actions before applying them, analyzing millions of sequence futures every second and selecting only the optimal control given the current conditions. 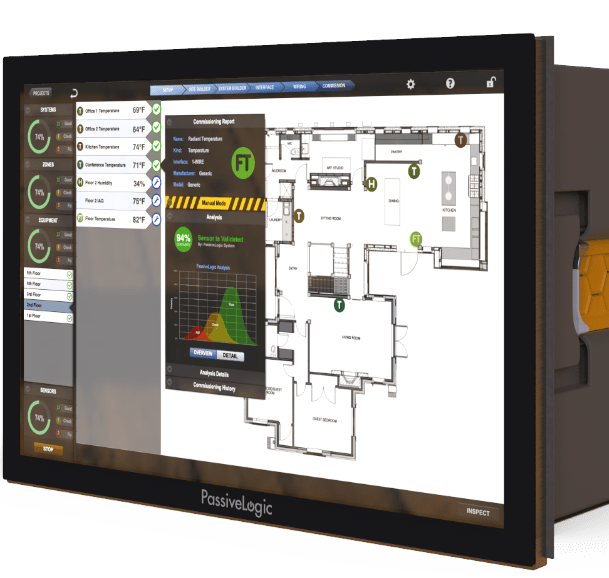 Utility-optimizing AI is a burgeoning business, with plenty of competition. There’s BrainBox, Aquicore, and Sidewalklabs’ Mesa, whose algorithms make fine-grained adjustments to HVAC systems on the fly. Augury, a startup developing sensors that attach to machines and record data that’s then analyzed in the cloud, works with service companies to diagnose and optimize systems like industrial HVAC. GE Digital’s Predix and startup Petasense offer similar Wi-Fi-enabled, cloud- and AI-driven monitoring sensors. And Carbon Relay boasts a product that leverages sensor data to make predictions about datacenters’ cooling usage.

But PassiveLogic claims it uniquely uses “digital twin” technology to understand the physics and interconnections among buildings, equipment, systems, and occupant physiology. In practice, the product introspects its operations while aiming for the best efficiency and generating its own analyses. At the same time, PassiveLogic uses control paths based on “comfort” metrics instead of strictly air temperature, allowing it to evaluate how occupants might react to a given set of climate settings.

“There has been a lot of talk about smart buildings in recent years, but when people say ‘smart’ they really just mean connected,” Harvey said. “Our digital twin technology makes buildings truly intelligent and self-managing, taking them beyond conventional controls or other AI cloud add-ons in the marketplace.”

Digital twin approaches to simulation have gained currency in other industrial domains. For instance, London-based SenSat helps clients in construction, mining, energy, and other industries create models of locations for projects they’re working on, translating the real world into a version that can be understood by machines. GE offers technology that allows companies to model digital twins of actual machines and closely track performance. Oracle has services that rely on virtual representations of objects, equipment, and work environments. And Microsoft itself provides Azure Digital Twins and Project Bonsai, both of which model the relationships and interactions between people, places, and devices in simulated environments.

To begin using PassiveLogic’s platform, buildings install the company’s Hive controller, which houses the 12-core processor and neural core that runs the digital twin engine. Hive works with Ethernet and Wi-Fi and has built-in mesh routing that helps it to design control systems, generate project specs, create bills of materials, and connect users to local stocking distributors. Hive even fixes wiring mistakes on the fly and automatically generates control topologies and interfaces from basic building and system layouts, and it works with multiple Hives in tandem to self-assemble into a network.

PassiveLogic also sells sensors — Swarm and Swarm Mini —  that measure things like air temperature, radiant temperature, humidity, and air quality while doubling as thermostats. Both work with Hive to track and respond to occupant locations via Bluetooth mesh triangulation, monitoring activity to fine-tune climate settings in real time. Users can access settings on the Hive screen, from a browser, or with PassiveLogic’s mobile app.

Keyframe Capital and Addition co-led PassiveLogic’s series A announced today with participation from RET Ventures, A/O Proptech, and NREP. It brings PassiveLogic’s total raised to date to nearly $18 million, and it comes after the U.S. Department of Energy and Swiss HVAC component manufacturer Belimo awarded the startup an over $1.1 million contract to define an industry digital twin technology standard for next-generation automation systems.