RapidAI (formerly iSchemaView), a startup developing a portfolio of stroke imaging and assessment products, today closed a $25 million round. The company says the funds will be put toward strategic growth initiatives around the world.

“Given our growth and profitability, we intend to use the strength of our balance sheet for technology licensing and acquisitions,” CEO Don Listwin told VentureBeat via email. “We’re seeing multiple opportunities in other technologies and companies, and as a platform provider we see great opportunities for integration into our system.”

RapidAI asserts that computer vision has tremendous potential in medicine, and it’s not alone. Zebra Medical Vision spent three years architecting an end-to-end computer vision system capable of diagnosing breast cancer and cardiovascular disease, and startups like MedyMatch are applying AI to medical imaging scans from acute stroke victims. Also in the mix are heavy hitters like Google’s DeepMind, Google AI, and Arterys, which are using AI to detect the presence of diseases like cancer or degenerative eye conditions. DeepMind, for instance, recently partnered with the U.K.’s National Health Service to engineer an algorithm to search for early signs of blindness.

RapidAI has its origins at Stanford University, where Greg Albers, Roland Bammer, and Matus Straka developed a medical image processing platform dubbed Rapid with funding from Sequoia Capital’s Don Valentine. After installing Rapid in eight U.S. centers and a single European center for a U.S. National Institutes of Health study, Albers and Bammer cofounded RapidAI and purchased the rights to the Rapid technology from Stanford. 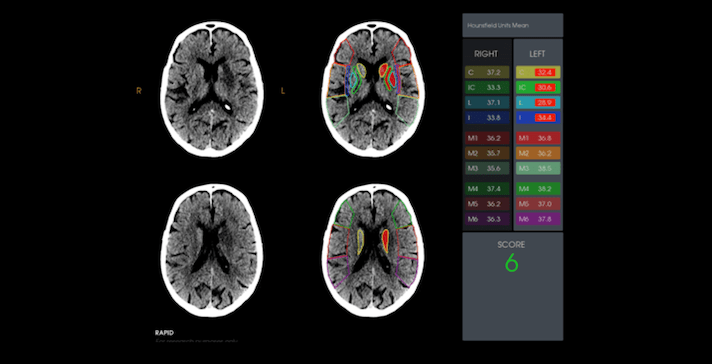 RapidAI offers a number of imaging products to address the over 15 million people who suffer strokes each year, according to the World Health Organization. These include:

RapidAI also offers a HIPAA-compliant mobile app designed to give stroke team members access to results and preview files, plus the ability to communicate about patient care via an in-app messaging system. Alternatively, clinicians can use a web app to get notifications for new cases, as well as compressed scan images.

RapidAI says its AI algorithms have analyzed over 1 million scans from more than 1,600 hospitals in over 50 countries to date. The company recently received FDA clearance for Rapid LVO, and earlier in the year, RapidAI acquired Endovantage, a provider of aneurysm management products. (Rapid CTP, Rapid Aspects, Rapid CTA, and Rapid MRI have FDA clearance, and the Rapid platform is approved for use in a number of countries, including Canada, Mexico, Brazil, Japan, Israel, Vietnam, Australia, and New Zealand.)

The funding round was led by Lennertz & Co. Family Equity Fund. This is San Francisco-based RapidAI’s first public round since its founding in 2012. RapidAI, which has 150 employees and expects to have over 175 by the end of the year, had previously only raised $2.3 million, and it has been profitable ever since. A spokesperson said the company’s revenue is between $25 million and $50 million per year.